Popular Nigerian disc jockey has been pissed off by an Instagram user who had threatened to slap her if he meets her.

The Instagram user took the comment section of one of her posts to comment that he would slap her if he meets in person if she doesn’t do a particular thing before this year runs out.

The Instagram user with user handle, @ebam.one commented that if DJ Cuppy doesn’t get married this year he will slap her if he’s chanced to meet her anywhere.

Meanwhile this caught the attention of DJ Cuppy as she circled the comment, posted it on her Instagram story and captioned it with “FFS”.

“FFS” simply means “For F*ck Sake” which is a social media slang used when someone is annoyed. 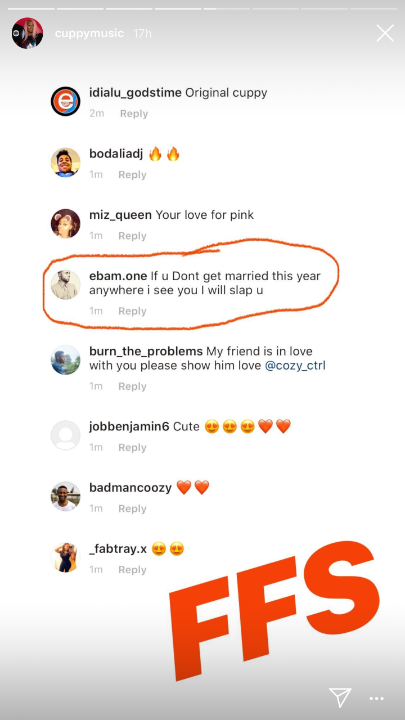 DJ Cuppy relationship talks has always been in the air for years now as she has spoken out that she now boyfriend and once stated she is searching for one.

Over the years she has dated popular Nigerian footballer, Victor Anichebe, Davido’s manager Asa Asika and has been linked to popular boxer, Anthony Joshua.

Rapper and singer, Eedris Abdulkareem, has opened up on the crucial role played by his wife in ensuring he...

Actress Regina Daniels’ billionaire hubby, Ned Nwoko, has triggered mixed remarks from cybercitizens after he took to his social...

Notable Nollywood actress, Destiny Etiko recently got besieged by her fans after she joined the PDP governorship campaign in...

Nigerian music star, Iyanya stirred reactions online after a video of him pushing a man on stage at a...
- Advertisement -

Usain Bolt has reaffirmed his commitment to Jamaica despite the recent reports that he has been defrauded of billions...

Popcaan delivers his new album, Great Is He, with a lot of fanfare. The 17-track project saw guest features from...

Proteins are the fundamental building blocks of life especially...

Women: 5 things to do while expecting your period

As a woman, taking complete control of your menstrual...
- Advertisement -

Rapper and singer, Eedris Abdulkareem, has opened up on...
Celebrity News