Home Entertainment Celebrity News Etinosa Cuss Out Victoria Inyama For Criticizing Her After She Apologized To...

Recall that Etinosa in an Instagram post shared yesterday, apologized to the General Overseer of Omega Fire Ministries (OFM), Apostle Suleman. She disclosed that her comment about an alleged side chic of the pastor being a member of the “bleaching gang”, was a joke.

However reacting to the apology, Victoria Inyama stated that the actress never apologized for desecrating the Bible but apologized to a man that uses the Bible. 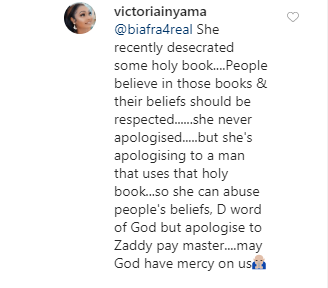 Etinosa who fired back at Victoria Inyama, described her as a “jobless, frustrated and retired old mother who doesn’t know her age and respect herself on ?nstagram.”

She insisted that she apologized for smoking with the Bible as she accused the veteran actress of peddling lies and gossip to tarnish her image. 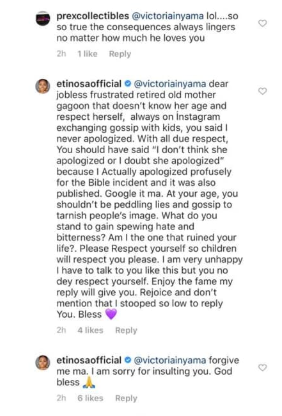